PAXbaby is celebrating Valentine’s Day with 13 days of Peace & Love leading up to the big HEART day itself! It’s day number 11 and we’re doing something a little unexpected, we’re celebrating the little coincidences, the things we didn’t plan for yet find their way into our lives, sometimes they work out even better than we imagined, sometimes they don’t, but one thing we do know is the unexpected is part of life!

I’m not a big fan of surprises. In fact I’d prefer you tell me know what’s in my Christmas gift, even if I have to wait 10 more months before I can open it! But I do like the unexpected. Seeing things that perhaps don’t quite fit in yet still look fabulous. Like the shocking pink hair on my favorite Blabla Boogaloo, Yoko…

I love finding babywearing in unexpected places! Last year TurboTax aired this commercial which shows a father wearing his baby in an Ergo! The DVR came in handy the first time I saw this one, and of course my hubby thought I was nuts playing and rewinding and playing again, asking over and over if that was an Ergo baby carrier. 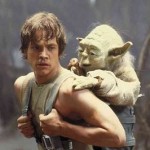 And of course there’s the silly baby carrier sightings, like Luke carrying Yoda during his Jedi training. Although we can’t really call Yoda a baby, the carrier Luke is using was certainly inspired by a traditional meh dai, straps over the shoulders and around the waist.

Babywearing is becoming much more common, or I suppose we should say it is experiencing a resurgence, since carriers carriers have been around since people figured out how to weave cloth together. Even a decade ago, however, it would have seemed strange to see a baby being worn instead of in a stroller.

Now that the benefits of babywearing are getting more attention, celebrities and public figures are catching on. The average family can babywear with pride and not feel like a pariah or earth-hugging hippie (not that it’s a bad thing ;))! It’s still a little unexpected, but certainly a welcome sight to see slings in the media. 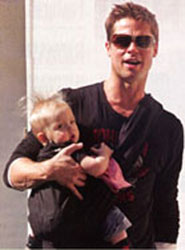 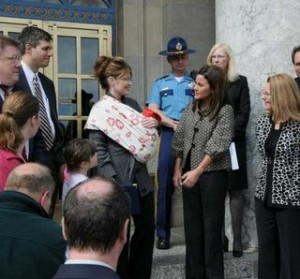 What I love from Jana of Sidetrackd: Two Very Special Ladies

On Sunday morning, January 10, as we prepared to leave for church, my Mom called to let me know that my grandmother, Mema, had been hospitalized due to heart attack.  At that point no one really had much information except that she was stable and being admitted to the cardiac care unit for tests and observation.

On Monday morning, January 11, I was awakened about 5 a.m. by contractions that steadily grew stronger and closer together.  I was 40 weeks 3 days pregnant, so we were anxiously awaiting the arrival of our newest baby girl.

Our precious baby girl was born that afternoon and immediately stole our hearts, just as her older sister (3 1/2 years old) and brother (21 months old) had upon their births.  My parents made the three hour trip from Nashville to be with our older children while I was in the hospital.  The news they brought of Mema seemed to be good; everyone thought she was improving and that with time and a change in medication she would be able to go home.

The next twelve days were pretty much a blur of newborn care, mom recovery, tending to the older children, and attempting to get as much sleep as possible.  And then, on Saturday, January 23, my whole world shifted as I learned that my Mema had left this earth and gone to be with Jesus.  As I spoke with my Mom on the phone that morning, I struggled with many things: holding back the tears well enough to carry on a conversation, guilt at not having been able to visit Mema in the last few months, and a profound sadness that my tiny baby had not been able to meet her great-grandmother.

I immediately made the decision that I had to be at the funeral; there was just no way that I could miss it.  Even though that meant loading up all the little people, making the three hour trip, and exposing my two week old baby to all of the people who would be coming and going during the visitation and funeral.  For me, this was really a no brainer, the choice between the temporary hardships of a 24 hour trip to Nashville or a lifetime of regret for not being there.

Mema was a very special lady.  She poured her love into my life from my very earliest moments.  She set an amazing example of what a wife should be as she cared for my grandfather during his years of battling muscular dystrophy.  She demonstrated the love of a grandmother in every way.  She influenced my life in many ways.  Her death is felt by many and by me every day.

Our baby girl is a very special little lady.  Right now because she is ours and, hopefully, in years to come because she grows and matures into the very special lady God has created her to be.  I feel blessed to be her mother and pray that she is as good a woman as my Mema was.

I did get to introduce these two ladies who mean so much to me, although not in the way I had hoped.  Instead of a cheerful welcome into the arms of her great-grandmother it was a tearful, one-sided conversation.

Mema, you are loved and missed, but a part of you lives on in each of your daughters, granddaughters, and great-granddaughters.  Including this tiny bundle of baby girl that I hold in my arms.