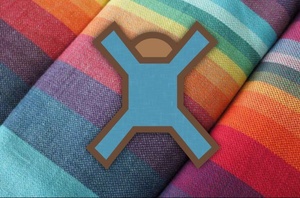 The hardest part, really, is to decide which carriers to bring and which to leave behind.
Especially when space is limited.

My worst fear was to leave something behind that I would be wishing for later.

Things  to think about:

We were going, by plane, to Mexico for a week for my bonus sister’s wedding with our four month old, and would need at least one carrier user friendly for un-experienced wear-ers. 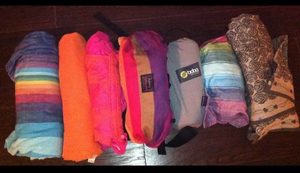 First I picked everything out of my stash that I thought I would want, then:

I narrowed my stash down to four contenders:

Once there, I immediately was wishing that I had  brought:

SEE?! Regrets even after being so picky!!

I seriously thought more about which carriers I was bringing, than which clothes I was packing. Whoops. 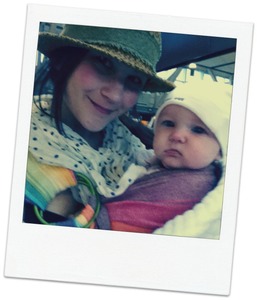 Our flight left early in the morning, and I decided on wearing my WCRS first.

Since the sling has metal rings, I was asked to take my baby off through customs.

Because  it was a RS, I just popped her back in and went on my merry way.  No hold ups, no waiting to re-wrap or re-buckle. Easy peasy.

On the airplane, I wore her for take off in the WCRS and she nursed peacefully and fell asleep for most of the flight. 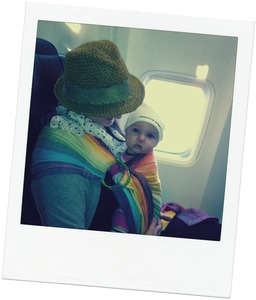 Once off the airplane, I wore her throughout the airport, and she slept in comfort even though we were all tired and hot. 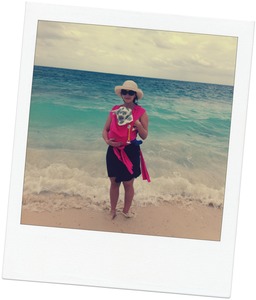 I used our WCRS and the Hop-Tye the most while actually at the resort.

When we walked the 45mins into town, I wanted a two shoulder carrier for comfort and support, so used the Hop Tye. We both stayed comfortable, and were never too hot. I put a floppy hat on both of us, and had her wear long, thin, UV proof pants and we were both covered and protected.

Both the ring sling and Hop-tye were awesome multipurpose carriers.

Since we were with a lot of childless people, I was thankful for my long tails to use as nursing covers.

(I’m actually nursing in this photo)

The tails were also good as sun shades.

So many other moms at the resort came up to me asking me about my carriers, as they were trying to push their strollers through the sand, and the local Mexicans were super happy to see me babywearing, and loved telling me about the traditional Reobozos and such.

Babywearing is always a nice conversation starter with strangers. 😉 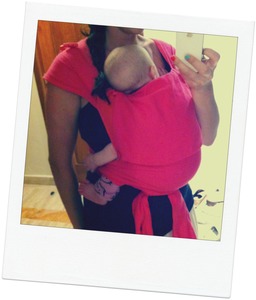 When we went out to eat, I mostly wore my WCRS, if it was a fancier meal I would wrap her on my back, or front with my wrap.

Here is where I wished I had have just brought a shorty. It wasn’t that I was too hot, but there were a lot of ups and downs, and a shorty would have worked a lot better in a resort type atmosphere.

I was able to easily access the delicious buffet, and had two hands free for holding my plate. Whereas other people there with babies, were juggling strollers, plates, drinks, and everything else. 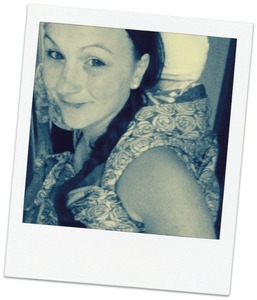 Oh man, nights I was especially thankful for babywearing.

I was lucky my daughter is only 4months old and still in the sleepy stage. I would literally pop her in the carrier most nights and she went right to sleep. We were able to see the shows, hang out with the rest of our family every night, listen to the live music, and enjoy the resort, and just relax without being banished to our rooms because of a sleepy, grumpy, overtired baby.

She just slept whenever she was tired, woke up to smile at everyone, nursed, and then would go back to sleep.

We always received tonnnns of compliments on how good our baby was, and I just kept saying that it was all because I was wearing her. Seriously! She was up safe and cozy with mama, and was not being passed around from person to person, she was able to turn into me if she had had to much excitement, and close her eyes whenever needed. 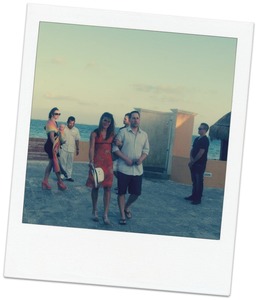 For the wedding rehearsal, I was able to wear Baby#3 in my beautiful WCRS. Tails touching the ground, short fancy dress, big sunglasses and wedges.
Babywearing does not mean you can’t dress up!

In fact, tails to the ground, babywearing makes me feel beautiful, powerful, and like a rockstar. A mama rockstar, that is haha.

Since my husband and I were in the wedding party, I was not sure how much babywearing I was going to get done at the actual wedding. However, I chose my prettiest borrowed wrap, and also threw a ring sling into the bag for my Mom. I ended up wishing here, that I had have had something more user friendly, like a soft shelled carrier for my mom to use. She used the ring sling, and said she was comfortable, but I could see that she didn’t have it adjusted quite right, and was too stubborn to change it 😉 haha 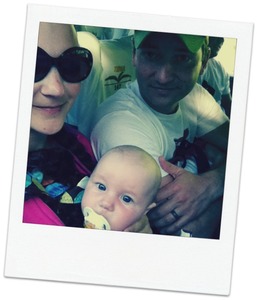 On the way home, I decided to try my Hop-tye, in the hopes that I would not have to remove it through customs, as it had no metal or buckles anywhere.

I was not asked to remove baby #3, and we both sailed through customs easily.

Not sure if that was just my luck, or it was in fact that we did not have any metal on us. Just a quick pat down of the front of the carrier and we were on our way.

Wore baby onto the plane, and this time, since it was an evening flight, we took her out and I just nursed her and she slept spread out on my lap for nearly the entire duration of the flight.

PS. Ten points if you read through this entire thing. haha.