In a babywearing  land far far away, every parent wore their baby in a Beco Baby Carrier, and every baby was content, happy, and sweet!  In this magical land, every baby was carried until they could walk on their own, and exersaucers and jumperoos were piled by the 100s in dark dungeons and forgotten by the blissful parents and their contented babies!

But before this was the norm, an evil witch ruled the land of babies!  She had cast a spell on all the babies’ parents, enchanting them to believe that the Baby Bjorn was the best baby carrier in the land.  Oh, how the babies’ parents’ backs ached, and their shoulders were so sore, and their necks hurt with the weight of their precious babies hanging from their bodies.  The babies couldn’t understand why their parents faced them out towards the loud, bright world…  All the babies wanted was to be cuddled, and snuggled, and held close enough to kiss! The babies wailed their baby wails, and shook their baby fists, but their parents were oblivious to their babies’ sadness.  But while the evil enchantress laughed at the parents wearing their babies in ridiculously uncomfortable baby carriers, and thought of her next evil plan which involved baby bucket car seats and fold ‘n go strollers, a babywearing princess heard the sounds of distress coming from her fifth baby and realized with a start that he was NOT happy with his legs dangling and his head falling this way and that.  She bravely fought her way out of the witch’s enchantment, took off her Bjorn and threw it at the witch, knocking the witch’s  magic baby bottle wand out of her hand and breaking the spell!

With a gleeful yell, the babywearing princess summoned all the babywearing parents to the very top tower of the very highest castle where she had found a locked treasure chest.  With a magic key that she found tucked into her baby’s cloth diaper drawer, the princess opened the chest and out flew enough Beco Baby Carriers for all the babies in the land!  All the babywearing parents thanked her profusely as they put on their Becos,  hailing her as the Beco Princess and vowing never to touch a Bjorn again!  The babies all snuggled happily in their Becos, and lived happily ever Beco! 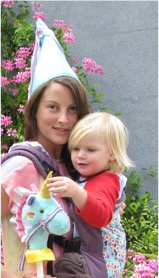