BabyHawk in the news!

Loved this article in MAIN STREAM news, the Orange County Register, from my home town in Southern California! And thank you to M. Anthony Photography for this awesome picture! More of those to come later this week! 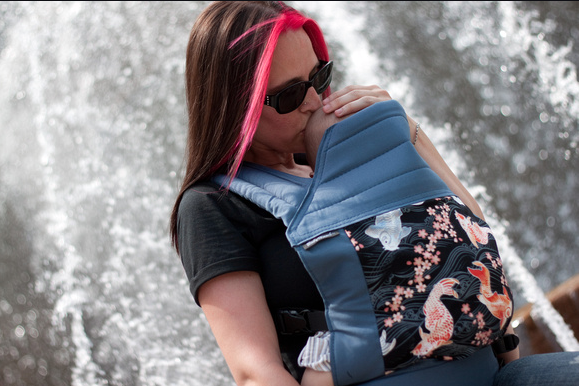 When Robyn Collar was pregnant with her second child in 2005, her husband was earning $11 an hour at Home Depot.

“Our first child had special needs and was still in diapers. I couldn’t afford a baby carrier and didn’t like the ones I saw anyway,” she recalls. “I saw a meh dai (Chinese-inspired soft baby carrier) and thought I could sew my own.”Friends who saw the homemade carrier encouraged Collar to make and sell them. She tested sales on eBay and by June 2005 she had her own business — BabyHawk — and website. And by 2008 sales exceeded $1 million.While sales have been impacted by the recession, BabyHawk – her son’s nickname – is “holding steady” because it never relied on debt to grow.

Still, the company is far more successful than she initially envisioned. “We were doing anything to supplement our income. I thought maybe it would be a little extra spending money,” she say.Despite recession, “there are still parents out there; people didn’t stop having babies,” Collar says. “Baby carriers are cheaper than strollers so they’re an affordable option.“The business moved from the kitchen table of a two-bedroom apartment to an 1,800-square-foot warehouse and now to a 5,000-square-foot warehouse. It has 10 employees who sew the carriers in the United States, and products are in 250 retailers worldwide. Sales are about half online, half through other retailers, Collar says.

BabyHawks come in three styles: meh dai for infants to 40 pounds, meh dai toddler for 18 months to 40 pounds and Oh Snap for up to 45 pounds. And buyers can design their own, choosing from 300 different fabrics and 11 strap colors. “Our tagline used to be ‘a million combinations,'” Collar says. Prices are $80 to $140.”Retailers look shocked when we show them the Black Calavaras, but we promise them it sells and they always come back and say it’s the first to sell out,” Collar says.”